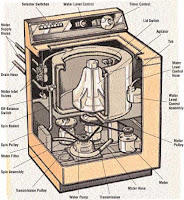 When speaking with Jow, I realize I often feel uninspired and unintelligent compared to the rest of the Mad Boy Scientist Club (MBSC).

I have to admit it very plainly, I don’t take shit apart just to see how it works and then attempt to either: put it back together or put it back together BUT BETTER. Let’s talk about my washer machine. It does wash. I don’t feel like I need to take it apart and know it intimately to validate its ability to do my laundry. I put my clothes in, they come out clean, fin. I don’t really feel the need to upgrade it to be a thermonuclear reactor too.

It’s sort of how I feel about magic. If it’s working, it’s working and . . .I don’t feel like I need to be knee deep in its viscera to believe that. However! If my washer machine stops working right or starts making alarming noises, you can be damn sure that I’m googling “what the fuck is wrong with my washer machine” and trying to figure out how to fix it. Perhaps, this is a *reactive* approach to magic in general verses a *pro-active* approach to magic and naughty and whatnot but . . .it’s how I am. See: The World is My Poorly Fed Seamonkey Tank. I just . . .don’t care enough most of the time to get deeper in. I mean, I have to be honest, my brain needs plenty of room to be occupied with the latest friend scandal and what’s going on in Degrassi.

I honestly didn’t think I had what one would call strong . . .faith in general. I’m a suspicious, cynical person and my generation was taught first that it was cool to be that way and then that it wasn’t. Like, last year someone sent the memo that it’s not cool anymore to be jaded. At 31, I can only do so much to fix that. But I guess in some strange ways, I do have faith. I believe in my washer machine and my magic enough that I don’t really need a complicated system for shit to work. But it’s interesting to see these differences in a scientific approach verses a faith approach, Jow and I gently butt heads about this all the time. He gets all excited to learn some kind of random minuta about something that frankly he’ll likely never use and I know more than I ever really needed to know about The Real Housewives of New Jersey.

And . . .I guess, that I have enough Catholic programming that I don’t feel like I’m constantly in this antagonistic GM/player relationship with God Herself. I don’t need to constantly be getting one over on Her due to some kind of paper pushing error that allows me to do so. I don’t collect my arete that way, I just don’t. And . . .it bothers me when something sacred is treated like a party game. I’ll never forget an occult event afterparty I was at where someone had managed to get the ability to ordain through some kind of loophole and he came in with a bottle of beer in one hand and a bottle of olive oil in the other and gleefully said, Who wants to get ordained tonight!

Yes . . .we were at an occult party but let me be frank. Just about everyone there was three sheets to the wind and waaaaaay more concerned with who they were bedding that evening than receiving sacred orders and watching the barrage of giggling drunk girls go to receive theirs just made me ill inside. Because, knowing a good number of those people in question, it didn’t matter to them (with a notable exception who did treat it seriously, he knows who he is), it was just another merit badge to collect. It wasn’t about what to do with it afterwards, it was about sticking it to The Man.

I received my Reiki training from two renegade Reiki masters who didn’t believe that Reiki should cost you a small fortune to receive, though they both paid their dues for it. I thought about it strongly both times (receiving first Reiki I and then II). It was almost a year in between I and II for me. I used it, I thought about what it meant to me to have it, what I could do with it. Admittedly, I didn’t follow up with getting formal training as I always meant to, but I use both all the time. Both initiations were deeply meaningful experiences to me and though *technically* I did receive Reiki III, I would never go to a party and randomly pass out attunements.

I don’t have a lot of the baggage with Catholicism that some others do. I think coming from a practice that started as a very small child and then making my peace and breaking off from the Church, I don’t want to try to find loopholes to get at their tasty Catholic magic because . . .I’m not Catholic anymore. JC as much as I do revere Him is not on my altar. When I left, I left which meant leaving behind everything that could have happened for me magically with Catholic magic. For some people, the line isn’t so clear in a good way, they can use both a more pagan magic and a Catholic magic together (as santeria sometimes does) but I haven’t been able to meld the two. And if I can’t make my washer machine won’t wash *and* dry my clothes, I need to move on and let it just wash my clothes.

I don’t want to put in the time, energy and sacrifice to become a saint to get a saint’s powers and frankly I don’t expect to get them by finding a loophole to get at them. For yet another dig at Tim Ferris, his pleased recounting about how he got better grades in college because he would wear down some poor barely paid teacher’s assistant until s/he acquiesced to him makes me ill. Maybe that’s the way the world does work, but I don’t want the things I’ve earned to come to me that way. I don’t want to bully my way into blessings at other people’s expense. It’s gross to me and I just . . .won’t. When I ran my own business, I had to make a lot of decisions about what would happen at my events and I am incredibly proud to say that I never compromised my integrity and what I believed in along the way.

For me, I see magic as a simple input output. Sacrifice = power. How much are you willing to sacrifice for your power?