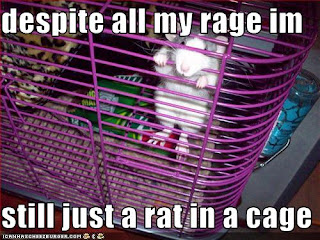 This is a question I’m generally v. on point with.  Thorn tweeted it today and when I looked at her blog yesterday, she wrote (along with Penelope to some extent) about being over extended which Jow pointedly emailed me this morning about.

I’m not v. on point with it today.  I’ve been working a lot of overtime, interviewing like crazy and I’ve been doing a lot of craft shows.  (I’ve learned that Mojo bag oils and High John oil scare people at craft shows but the other oils sell pretty well.  I sold the most oils at a church show funnily.  I also started getting scouted for other shows at my last show and I rolled out my Dream Ambassadors which are little felted sheep that can be scented with lavender oil to help you sleep, all but one sold at my first showing of them)  I got cleaned out at my last show and now have less than two weeks to spin straw into gold and restock for my next show.  I have been too exhausted this week to do anything but order supplies due to the overtime and waking up super early and working super late.  The getting up super early has been causing random strange existential crisises for me.  I’ve also been clocking in time with friends who are having problems and spending time with my family and a little baby sitting for my nephew.  Generally Jow and I have Mondays together to spend the day together but this week I was working.  I’m having a vampire themed dinner party tonight and the house is still in disarray and I need to cook the dinner for the dinner party.

I’m totes crispy fried to the point that I need to make lists to get anything done because otherwise I frankly have no idea what I’m supposed to be doing and things that are important are falling through the cranks.  I don’t know what day it is really and I feel like a lot of my core priorities are slipping to the wayside in my Ferengi overzealousness to make enough money to finish paying off my debt and to save money for our wedding as well as having that crazy thing they call a savings account.

I used to live like this all the time.  Have you ever seen The Rachel Zoe Project?   When I get out of sync with my core priorities, she’s pretty much exactly the way I am (except substitute “forget to eat” for “over eat”).  I mean, massive credit to her for being so successful and doing what she loves and being so hardcore, but it’s not the life I genuinely want to lead.  I don’t like the way I am when I’m too bogged down in the material and I start to feel empty (which i try to fill up with the material) and also I get a certain sharpness to me.  Not the playful occasional cattiness, but a certain sharp cruelty and hardness that I don’t like about myself.  When I’m like that, I rarely do magic.  While the material and the spiritual are not at odds per se, if you get too pre-occupied with one and not the other, you’re imbalanced and it’s hard to fully function I find.

(A sudden revelation: In Neo-Pagan Shamanism, it’s often talked about that you need to be able to walk between the worlds.  I always thought that’s why I sucked with being a shaman – because I’m somewhat of a cement head and wasn’t always having these big astral adventures like the Wasband but I think my real balancing of worlds is to balance my spiritual self [which is as much internal as it is external] and the material world which I got better at post-divorce but still sometimes struggle with.  I tend to be too much material and not enough spiritual though when I’m losing the battle.  Something to marinate on.)

Things that are currently falling to the wayside (which are most of my core life priorities):
Eating well
Exercising (which makes me feel completely disconnected from my physical body, though I’ve been focusing on my appearance – again, material vs spiritual for me at least)
Magical practice
My version of a meditational practice
Writing (for a while I was strictly doing freelance which is devoid of spirituality for me and I’m being pretty forcibly pushed away from that from my Powers That Be but I haven’t been able to get back to writing things that help my spirituality)
Keeping my house in an orderly fashion

Of course, as I’m writing this what am I doing?  Procrastinating cleaning for the dinner party and sending emails for wedding related items.  Have I gotten dressed or brushed my teeth or taken my pills or eaten anything?  Nope.

Sigh.  Something has to change.  I need to get refocused.  I keep hoping it will magically happen but so far not so much.  It’s hard to get refocused when I feel so crispy fried.  I guess I can start to try to have at least one of my core life priorities on my list to do on my daily list.  Mostly though it just feels like being a hamster on a never ending wheel.

What are your core life priorities? Are you being mindful or neglectful?