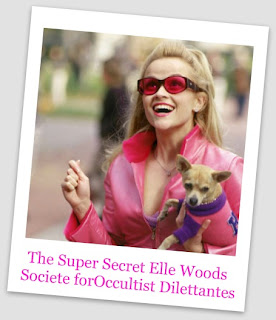 In ADF Druidry, there’s a whole section in the beginning of the rite on Outsiders which is actually one of the more hotly contested aspects of the ADF ritual between ADF groves, the contested aspects tend to focus on 1. Who are the Outsiders? 2. What should be done with the Outsiders? Some groves think certain gods and attributes should always be Outsiders and Outsiders should be banished. Well, as I’ve mentioned, my grove has more in common with tent revivalists than with High Episcopagans generally, we take somewhat of a different stance than that.

Our grove generally feels who the Outsiders are depends on the ritual. If you’re doing a ritual to the Furies for example, the Olympians are likely to be Outsiders. Eris’ Outsiders are going to be different than Hera’s Outsiders. We also don’t banish as that should (theoretically) be permanent and not for nothing, living in NJ, you need your crunchy shell of cynicism, wariness and snarkiness to get through the day. But. They’re not the most helpful aspects to get through a ritual that was basically started by drunk college kids in the 60’s who wanted to break Berkley College’s administrative brains while invoking gods from cultures that were and are pretty far from America in someone’s living room in New Jersey. So we basically ask those aspect and those Gods and ghosts and whatnot who wouldn’t be comfortable for the rit to go sit on the porch until the ritual is over and watch the college kids and cars go by until everyone comes and collects their Outsiders after ritual. We also make offerings to the Outsiders as well (generally with a carefully worded, Please accept our offering, not the offerer. . . the Outsiders tend to like to linger with the offerer and will often try to persuade the offerer to go on a fun adventure with them instead of sitting through boring ritual). Sometimes, people attending the rit feel like Outsiders themselves which can be for any reason from it’s a pantheon they’re not comfortable with, the rit itself isn’t where their headspace is at or what is politely referred to as “the weather in your head” (which often is a euphemism for having High Drama with someone(s) in the grove or just life shit that you’re going through that has nothing to do with anyone there but puts you in a sour mood) and I can tell you from experience, when the Outsider invocation is made and you feel like an Outsider, it’s hard not to follower the offerer outside (I think at the Pagan picnic with the other grove invoking and it being so different than how we do things that when they did the Outsider offering I saw everyone from my grove visibly twitch not to follow but . . .manners).

Where I’m going with all of this is that I think it’s very possible to feel like an Outsider even here on our beloved blogosphere. I’ve spoken in the past about being fretful about not fitting the “kitchen witch” mold closely enough and how sometimes that’s hard for me. This year, while I love you all, it’s been hard with the never ending High Magic Grimoire Club that has taken root in much of the blogosphere. I dutifully read and I’m happy that it works for y’all but it doesn’t do a whole lot for me. As it doesn’t do a whole lot for me, it’s taken me out of the conversation for the better part of a year. Which is nobody’s fault! I’m not casting blame or anything, it’s just not where I fit. I mean, I even live with one so I harass him with a never ending stream of questions hoping that something will click at some point which inevitably essentially disintegrates into an exasperated “because that’s the way it is, that’s why!”. We finally got to a place where I got it when he explained that you can’t just date High Magic, you have to at least go steady or get engaged and get into a super srs arrangement straight from the gate. Man, I cannot commit to anyone or anything like that, I want to have an awkward first date where I can ask some questions and see you do something charming and cool and then make my decision from there. You can do that with Hoodoo, Wicca, ADF Druidry and even layperson Hinduism.

So I’ve been marinating a lot about where I fit. I’ve been thinking a lot about Gordon’s post on little magics everywhere which is my jam along with radical practicality. For some reason for a long time I’ve hesitated to call myself a Chaos mage. Maybe because the first time around, it was this super cool 90’s phenomenon that felt super alterna and punky and everyone doing it was way cooler than I was. To me it was like the first Matrix when that was impressive at the time or like Hackers or whatever else that was going on that had only a vague basis in reality but everyone was really excited about it anyway. The two girls I know locally who id as chaos mages are kind of like a modern 2011 version of that which is why I’ve also hesitated about the label which is super stupid because they’re also close friends who I’ve done magic (awesomely) with and they are super down to earth and awesome with real problems. I guess I felt like I didn’t fit the mold there either exactly? So besides the obv revelation that no one perfectly fits any mold, I had another revelation when talking to Jow:

Me: I don’t know! I just do stuff! And people seem to relate to it even though I don’t feel like I have an orderly manner in doing it and I feel like a toned down version of Penelope Trunk with my apparent pathological need to spew out all my fucked upness and flaws to the internet.

Jow (patiently): But you’ve been published, you have thousands of people reading your Witchvox articles and sending you emails—

Me: What? Like it’s hard or something? Ohmigod! I’ve got it! I’m the Elle Woods of the occult world!

Jow: Hee! Actually, yes. People underestimated her a lot but she got into Harvard law school and graduated at the top of her class and she has a big heart and she sort of marches to the beat of her own drummer. Even though people at Harvard thought her clothes was crazy, she didn’t care, she wore what she wanted anyway. She didn’t change herself to fit in.

Me (dreamily): I love her clothes.

But it’s funny, I was really thinking about it, much like Elle didn’t fit in with stereotypical Harvard students, she still carved a place for herself and did it her way. I’m always going to be a fashion dork which tends to not be the norm with Pagans in my age group locally, I’m going to see and interact with the gods through clothes and music because that’s what makes sense for me. I’m never going to want to do much high magic, I’m always going to want to do little magic everywhere and I’m just . . .going to be me and not worry about being whatever enough. I think that’s where I struggle in writing my book, I feel like I’m not mommy enough for a kitchen witch book but not alterna enough to take more of a super srs approach. So whatever. I’m just going to write the way I write and do things the way I do things and stop worrying so much.