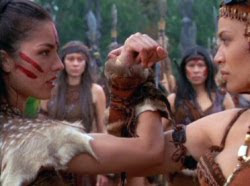 When I was a younger amazon, we used to go to this restaurant/club in New Brunswick called Gaebel’s all the time. They would push back all the tables later at night and there would be a dj spinning vinyl. I was all full of piss and vinegar and tequila those nights, wearing a mini, belly top, and stompy boots. My hair would be up in pigtails and I would be smeared in sweat and glitter, and whenever Hypnotize came on, the whole entire room would go *ballistic* and it was just such an awesome feeling of being young and badass.

Gaebel’s closed about four years ago. Hypnotize came on the radio on Friday when I was coming home from a very long all day meeting in Princeton. I was wearing corporate clothes with a silk scarf and was pretty sure I would never again dance to Hypnotize and more sure my life was over.

As a younger Amazon, I used to dress with more intent. Clothes, makeup, jewelry, all of that helped me present the image I wanted to present for whatever I was doing. It was my warpaint, my sword, my shield, my poison cup. Somewhere, during the divorce last year, I lost this piece of myself.

I wouldn’t credit Wasband with having that much power that it was solely the soul crushing process of being divorced that did this to me. I knew right before 30, I was transitioning. As a Dianic, I do believe in the maid/mother/crone three, as much as supersrs occultists wrinkle their noses at it. Here’s the thing – being a sexual virgin doesn’t make you a maid, having kids doesn’t make you a mother, your period stopping doesn’t make you a crone. Not in and of itself at least. Being free and in charge of yourself makes you a maid, giving birth to *something* and being changed by it, be it yourself, a creative project, your hearth, or your career makes you a mother, and the wisdom you gain from all your life experiences and seeing the end of your own life and out the other side makes you a crone. There are other things too and I could and probably should elaborate further on all of this and my own life experiences involving these things in a later entry.

But I knew I was coming to the end of my maidenhood. At first, it was pretty awesome. My 30th birthday, surrounded by friends in dresses and ties, all of us singing, eating caviar and pizza and drinking champagne until we all were more than just a little tipsy. Buckling down on my writing. Getting my
finances under control. Getting rid of 100 contractor bags full of old fetters. Getting a hearth of my own. Getting my clitoral hood pierced, posed in Sheila-Na-Gig position, uttering a primal amazon scream and one of my amazon sisters getting me ice cream after for going through the ordeal.

And then . . .I sort of faltered. All of the clothes I would wear as soon as I could wiggle out of work are now neatly stored under my bed, only to be taken out for special occasions – conventions and the rare club night. I was becoming a mother, a hearth woman in my own right but what did it mean? Who am I? It may sound trivial to some of you, but I believe in what Catherynne M. Valente said in her Fairyland story, “‘We must dress well, or the future will not take us seriously’, Goodbye had said.” How I dress reflects a big part of who I am. And in that respect, I have been floundering for over a year. What do I want to wear to work? Or out to dinner? That’s much more of my life now than late nights.

I had lost the joy and the magical purpose I had with dressing with intent. Recently, I had just gotten it back. New clothes, new makeup, new hair. It all goes a long way. Jow was supposed to go out with myself and my “mind sisters”* as he calls them but he bailed. Long story short, we fucked up the date for where we were supposed to go and went to the Breakfast Club instead.

But! Before that, I dressed with intent. Black and grey kilt, knee socks with little buttons, a ruffled keyhole top. Make up on, hair did. Then I decided to use some Come to Me oil, Bad Ass oil, and BPAL’s CENTZON TOTOCHTIN on various bits of me. I then used Miss Spice’s trick of using an eyeshadow brush and hand sanitizer to draw appropriate sigils on me for the evening. Purely for . . .research of course. Not for any selfish tail fluffing** purposes, of course.

It had been a long while since I had been at a club, I forgot the smell – sticky with bleach and beer. I had also forgotten that the Breakfast Club is Amazon territory with a *ridiculous* female to male ratio. I quickly dove into the experience of amazoning it up with my mind sisters.

Step 1: Arrive a little early so that the music is not crazy loud to be able to talk shit about Baby Amazon Rites which include: The Tragedy of Wearing Really High Heels, Two Drink Lesbian Dancing to Attract Male Attention for Later, Dancing on High Surfaces to be Better Seen by Males, Drinking a Literal Fishbowl of a Candy Colored Melage of Booze Too Many to Better Make Poor Decisions Later, and Take a Million Pictures to Document this for Facebook or My Experience Never Happened. As an older Amazon partaking in Older Amazon Rites (though not yet partaking in Elder Amazon Rites), key phrases to employ include: OMG, I thought going to a club was supposed to be about slinking in the dark and escaping not seeking out the faux paparazzi, Why is she crying, it’s only 11:30, Those shoes are ridiculous, If I see anymore Two Drink Lesbian Dancing, I’m going to throw up in my own mouth.

Step 2: Critique the dj. It’s your right! You’ve got ten years of club experience under your belt, Older Amazon! And if he’s particularly heinous, even better! Key comments: His mashups suck, there should *never* be any dead air time, He only plays half a song before moving on which is ridonkulous, and He has the rhythm of an epileptic monkey.

Step 3: Drink! You know how to not vomit in the parking lot on your new shoes, Older Amazon! You can stick to beer or shots or a signature drink. Feel free to make one questionable judgement call in the form of $2 Jaegar shots.

Step 4: Dance! You’re not here to impress anyone, you’re here to be with each other! And this DJ while often questionable, knows his audience which is you! He’s going to play all the songs *you* like so you don’t riot! And that fucking includes HYPNOTIZE! Get crazy! Bust out your moves! Howl along to Gloria, Material Girl, and other riot girl songs with the other Amazons so that the club is filled with your voices! Trance out to it! Get into the magic that is song, as that guy Jason talked about. Get totes into that Amazon egregor and when Welcome to the Jungle comes on, your whole Amazon cabal will let out a primal scream like you have never heard! It’s awesome!

Step 5: Uh-oh. You know the baby amazons are going to be trouble. They won’t be able to contain themselves from offending Older Amazons by spilling their drinks on you and nearly falling on top of you from their higher perches. Suggest getting into a fist fight with the ones particularly bothersome to you personally to your cabal to prove your cabal’s dominance. This is super awesome! Because (a) you get to feel BadAss and (b) you’re Older Amazons! That means you have sense! Your cabal will say no!

Step 6: Well, Older Amazon, you’re not a Baby Amazon anymore. That means by 12:30a, you are covered in a sheen of sweat and gently swaying and mouthing the words at this point. Disadvantage: Man, getting older suxxors. Advantage: You know who you’re waking up with in the morning, unlike the Baby Amazons.

Step 7: In the car ride home, you can regale each other with your shared Baby Amazon Legendary Stories of all the stupid shit you somehow managed to not only live through but look hot and be bad assed! Laugh it up! It’s your Goddess given right!

Step 8: Time for traditional feasting. Your old diner now sucks ass and is closed at midnight during the weekend which can bring you back to Step 7 for a quick round of The Scene is Never What it Used to Be, but you can find a crappy lesser diner to eat at. And! You get the perk of bitching about how bad it is! Eat: burgers, cokes, fries, gravy, and taylor ham on a hard roll.

Step 10: Sunday? Be a useless slag, Older Amazon! Take some tylenol, drink lots of water, eat some salty food and fuck around on the internet or tv all day. Because likely, that’s about all you can manage. If you’re like me and already auto-immune depressed (I have fibromyalgia) or have some other kind of nebulous stinky cat syndrome/getting older issue, good job killer! You just earned yourself a fibro day! Now you’re double entitled to not cook dinner and get chinese.

* Because of those Hills-esque intense moments we have when we all stare at each other for a minute and *ping* each other and have a complete conversation without saying a word. We used to do that when we played Mage and had a mind network up, but I’m told it’s scarier in real life. When we would game, we would point to each other and say *ping* and say out loud what we’re beaming into each other’s minds verses in real life when no words are actually said. ;p

** To fluff one’s tail like a peacock due to external stranger validation given based on your appearance.