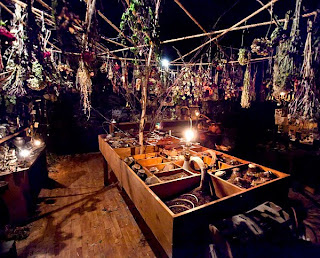 Okay, first, OMFG, Earthquake! When you live on the east coast of the US that’s not even supposed to be *possible* let alone a 5.8. Role playing games have apparently taught me nothing, I botched my initiative roll. Everything was shaking and I vaguely wondered if it was the quarry (What!) and by the time it sort of occured to me to find a doorway, it was over. All I kept thinking was this couldn’t *possibly* be an earthquake. Then it stopped so I was like, *ignore*. Until everyone confirmed what it was and that there are probably aftershocks to look forward to and now I’m anxious about it again.

Anyway. After my last blog post some stepped in to defend Jow‘s right to books (also I think we can blame Jow for the earthquake as he *is* prepping to sell some). As I scolded in the comments, I’m an occultist/witch/sorceress/magicsprinklepony too and I have my weaknesses as well. I’m personally a component junkie which is why I love Hoodoo so much – herbs, candles, incense, circle equipment, I love all that crap. However all of my components reside neatly in two small bins under our altar (okay maybe three) and his books take up four Ikea Billy sized bookcases. When living in a small domicile, it’s important that division of space should be equitable. I have a slightly larger clothing closet, he gets more bookshelf room, equitable.

But. If we weren’t being fair, one of the rooms in my house would look like the picture. I didn’t get to see that room in person when I went to Sleep No More, I had heard about it. Which brings us to initiatory experience, magic and theater. Let’s talk some truth talk here, to get any kind of Pagan/Occult experience to have a certain level of theatricality, you’re still dealing with your regularly practicing group and you’re probably in someone’s living room. It can still definitely be a super powerful experience but if you want to have an experience like out of The Craft or that one episode of Bones or basically any kind of awesomely executed movie scene . . .good luck. It’s not going to happen. Why? We’re not actors. We haven’t practiced that scene six times or whatever. Neo-Paganism, like it or lump it, has more in common presently with coming from the sixties radical movements than when theater and religion used to mesh together in Greece.

The closest to that Greek theater/nitiatory experience that I’ve gotten is seeing Sleep No More. Firstly, you’re wearing masks and you’re not to speak. Secondly, each room is amazingly detailed as it took over 400 volunteers to put together the rooms. Thirdly, they separate you from whomever you came with so that you can have a solitary experience that is exactly what you want to do at all times.

Mush a silent super sexy dance version of MacBeth with Rebecca and Vertigo and put it in a huge warehouse that you’ve turned into a hotel out of the 30’s/infirmary/insane asylum/graveyards and woods and you’ve got the play pretty much. Each performance lasts about an hour and then (sort of)loops three times to give you a dream like experience. There are smells everywhere (like the hospital wing *shudder* I’m still getting that out of my nose) and music and lighting and you’re allowed to follow whatever characters you like and ransack the rooms at your leisure (they have guides watching you, masked and silent). If it gets to be too much you can hang out at the bar which looks and sounds like a club in an old movie where they have actors and musicians singing and you can text and not wear your mask.

Everyone from Amanda Palmer to Dita Von Teese to Adam Lambert have been, why not? You’re masked, no one knows you. And all during the production, rooms are opening and closing (and locking and unlocking) so you’re never sure where you’ve been or what you’ve seen. And if that wasn’t enough, there are rooms that only a few people will get to see because an actor takes you to it (Inside the nurse’s hut where you possibly get pricked on your thumb for blood, the three people who get to see Lady MacBeth’s chapel a night, Lady MacDuff’s private room, becoming one of the dead king’s dead sons). It’s been estimated that anyone who goes only sees 1/16 of the show in a night.

It’s an experience unlike any other magical or theatrical experience I’ve ever had, it’s out in the middle of nowhere Chelsea and has a real hotel plate, you don’t give your ticket at the desk, just your name. It felt like being part of a secret occult society that I wasn’/t even allowed on the inner circle of. It was like a dream I can’t quite describe to anyone but remember vividly – eating candy stealthily in the candy shop, still nervous about touching things, going into a coronor’s office through a funeral parlor for four and finding that the dead girl wasn’t dead after all and finding my way to a blood orgy/ritual in an abandoned club with strobe lights and a half man/half goat and naked witches making out with MacBeth and the animal/man and breast feeding a fake baby under Hecate’s blood curdling cries, slow dream like dance movements as I watched scenes familiar and unfamiliar, the debutante’s ball, getting into a four minute staring contest with a silent bellhop, dialing phones, trying to peek into the nurse’s hut in the woods through the cracks on the outside of the hut, the room covered in tiny chalk words in strange patterns, the serial killer boards all over the place, watching things be buried and dug up in the cemetery, the Catholic idolatry everywhere, shaking presents and going through drawers and files, finding the bloodied torn apart padded room I was too afraid to enter, being splashed with Lady MacBeth’s bloody bathwater in the room full of clawfoot tubs and everywhere you went, you were surrounded by a tableau like this one (attendees are masked, actors unmasked).

And after a certain point, it’s hard to tell where you’ve been and what you’ve seen and things that are similar but not exactly the same and who is observing who and the fatigue that starts to give over to the ecstatic experience as it becomes harder and harder to tell what’s real and what’s dreamed. The *only* way you can ever experience such a ritualistic immersive experience is this way – to pay for your ticket and for there to be a cast of nearly a thousand people who have put this together to be so detailed and choreographed and the cast of thousands of devotees who have started their own strange rituals (like leaving their own hair samples in the room full of the four hundred volunteers’ samples) happening under the sanctity of the production, just like it’s happened in religion since religion started.

It’s an ecstatic, spiritual experience that is not like anything you’ll ever be able to experience again (and even people who have gone five or seven times have different dreamlike experiences each time) so as Ferris once said, If you have the means, I highly recommend it. If it gets extended until the end of the year, I’ll sell whatever organ I have to so I can go again. It’s been two weeks and I’m still dreaming and thinking about it.