This is a revised version of an earlier post, revised for clarity.

My circle sister, Donna got hit by a car while she was taking a walk down a residential street with her husband.  She died on Wednesday, February 5th.  How do I make sense of that?  How does Donna taking a walk with her husband + Jason Lutz not paying attention for a moment = we will never see Donna again?

If we perform magic, shouldn’t we know?  Shouldn’t my circle have been able to save Donna?  What is the point of this if we could not have saved Donna? I think it’s very easy when things are going well to say that if you are alert enough, canny enough, good enough at magic that you can lessen the pain of all situations.

Sometimes, some things are bigger than you.  Bigger than your magic.  Bigger than your magic with others.  Sometimes, even gods make mistakes.  Sometimes, you’re pissing in the ocean.  Sometimes, there is the matter of the Moirai.  Can you charm Them, beg Them, plead with Them, work magic to reweave bits of Their tapestry?  Of course.  But even the gods Themselves had to answer to Them.  There are some knots and breaks in the yarn that cannot be undone as I’ve learned as a Spinner and as a Witch.  Sometimes, the Moirai’s threads are unmovable. Magic is about numbers and odds.  If you want to not go crazy when terrible inexplicable things happen, it’s much better to imagine yourself at a casino.  You’re standing there at the craps table.  You need to roll a six for your point in this particular round for everyone at the table to win and be happy and jump up and down.  There are five ways to make a six with two dice, it’s a good number.  You have a good chance.  You roll a couple times but you roll a seven before your six comes up.  Everyone loses.  Just because the odds were in your favor doesn’t mean you always win.

If we’re not careful, it’s easy to find ourselves as Workers of all stripes to wind up stuck in a Secret trap – that if you were just better – a better Worker, a better manipulator, a better planner, a better everything — you wouldn’t have found yourself in the situation that is causing you unmitigated grief and despair.  You could have prevented this if you were better.  You deserve these terrible things that have happened to you because you didn’t work harder to prevent these situations.

If my sister and I were fighting as only sisters can, with one hand on the nuke button, the other at each other’s throats and my husband’s sister needed a triple bypass heart surgery and Donna died because she took a walk in her nice, quiet neighborhood, did we all deserve what we got? Did I deserve feeling awful because I didn’t do enough magic to prevent my sister and I from rubbing salt in years long wounds?   If Jow had prayed harder, could he have overcome his sister’s DNA when his dad had three heart attacks before he succumbed to cancer?  Because I didn’t reiki or say enough prayers to the Goddess or light enough candles in Donna’s name or better corralled the forces of live and death in a woman who was perfectly healthy and looking forward to her son’s wedding a week ago?   No.  That’s crazy talk.  That is some seriously for real crazy talk.  I refuse to believe that all of these incredibly painful events could have been mitigated if I just tried harder as a Witch.  You think I wasn’t praying as hard as I could pray?  You think I wasn’t crying as hard as I could cry?  You think I wasn’t Working as hard as I could Work? I changed the dice roll as much as I could change it.  It wasn’t enough.  Sometimes, even the Gods Themselves can’t change a situation, even the Gods roll craps on the first roll sometimes.  It’s shitty and sucky but it’s the way things work in the universe.  Not everything can be changed.

Older pantheons address this issue much better in my opinion, probably because awful and inexplicable things were happening to everyone every day.  A nebulous “this is God’s plan, suck it up and trust Him” was not going to cut it.  In Hinduism, it’s said something more along the line of, “God* takes pleasure in creating beautiful and wonderful things for you and equal pleasure in destroying that which you love most.  It is Her/His way.  It is the way of Leela, the divine game that everyone plays.” 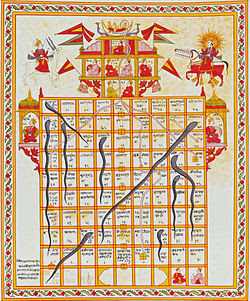 A traditional Leela game board. Snakes and Ladders has been played for thousands of years, it’s now played in the States as Chutes and Ladders by children to show the importance of responsibility and acting correctly.

Take Aways From This Lesson No One Wants to Hear, Especially When Your Life is Sunshine and Roses:

1. Magic is a numbers game.  It’s why you should still try your hardest at it because odds are slim in rolling a two on two dice before you roll a seven, it’s still possible.  Unlikely, but possible.   Your goal as a Worker is to try to hit your number before you crap out.

2. Because magic is a numbers game, it also means you will not always succeed in your dice roll.  Even when you do mundane work too.  Even when you try your hardest.  Everybody loses sometimes, no one likes to talk about it.

3. Losing does not make you a terrible Worker with terrible karma.  It means that you are involved with playing the game of Leela just like every other being (including the gods) in the Universe.  Sometimes it’s a snake, sometimes it’s a ladder.  You have to take what you’re given.  No matter how much it hurts.

We’ll always love you, Donna.  You deserved better than this.  May there be justice for you.

* Known by many names and forms in Hinduism