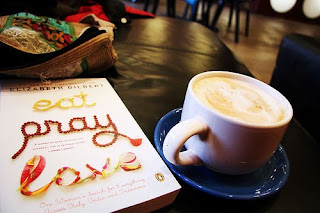 EPL is a very all or nothing sort of situation. As they used to say, you’re either on the bus or off the bus, it’s a very all or nothing polarizing sort of book. Some people love it with all their little hearts and others hate it with the firey burning of a thousand suns. Now, lest you think I am uninformed, remember, I’m a Women’s Studies grad/dork so believe me, you’re not going to really rock my world with cries of ZOMG! Privledge! I know, I got the memo, I get it, I agree. . .sort of [soapbox] look, she got paid as a writer to go on her globetrot to self improvement, I don’t know that that’s privilege so much as the paid writer’s wet dream, I get that she’s a white American woman with privilege but, that’s my life too. It is what it is, people’s stories shouldn’t be suppressed due to their race, class, gender, religion, whatever, period. I get that it’s easier for privileged people’s stories to be told and I support the fight to even the playing field [/soapbox] but at the same time it doesn’t stop EPL from having profoundly affected me in personal and life changing ways.

Anyway. The first time I read it, I was still smarting from my own divorce so I really related to the anguish, angst and general feeling of being lost. I really got what she said when she said, The only thing more unthinkable than leaving was staying; the only thing more impossible than staying was leaving. I too had my share of 2a bathroom sobbing and distressed conversations with god/dess/es. She gave me permission to figure out wtf I was doing with my life and her trip to India inspired me to really start my japa practice and start a regular personal practice in my life.

I’m re-reading it now and I just got paid for the privilege by AOL in the form of being paid to write a short summary for it for the honestly truly luxurious price of .10 a word (which is a lot for those of you who don’t write for a living, bottom of the barrel writing pays less than a penny a word, on average I make about .07 a word which isn’t bad) which will be out soonish. Now that I’m not a mess from the divorce/house buying process, I’m taking different things from it. Firstly, I love the Italy part, the idea of going to a country and speaking the language and just really enjoying the food, that’s my jam. I would like to get to do that with France at some point. It gels very well with my efforts to enjoy food fully and to be present in the eating experience (which is a challenge for me) and for me I take it a step further and try to be mindful in my eating in terms of feeling how my body feels about it . . .which I suppose is a meditation in and of itself.

But it’s her struggles with meditation that really resonate with me. It’s really hard for me to sit with all of those anxious, crappy feelings and to really be present in those moments. I’d really rather jam some food down my throat, not get dressed and eat a metric ton of crap, thank you. But I’m trying to move away from that, as much as I can (and it’s pretty uphill). I’m afraid to meditate completely solo at this point, there’s too much stuff there that I don’t feel comfortable exploring completely unsupervised. My methods by Buddhist standards would likely be considered “cheating” as one is supposed to stick your whole face into the experience without crutches. Luckily, I’m not a Buddhist and not interested in getting a rainbow body.

1. Keep it short. This is not an endurance test, you’re not getting graded, champ.

2. Put on sound machine, which is set to ocean.

3. Get in bed at bedtime in pjs. This is the time of day where my hamsters/monkey mind are going buckwild so it’s when I need it most.

4. Do japa practice (which is technically meditation anyway)

5. Close eyes. Go to my night time beach in my head. Sit down next to my totem guide (who is in person form), Crow. Watch the waves for a minute, see Yemaya in the distance. Put head on Crow’s shoulder.

6. Start counting breaths. Only go to ten and then start over. It’s harder than it sounds for a spaz like me. Try to let thoughts drift naturally and not judge them. Likely fail at that part and start to get torqued. Crow will offer gentle guidance* or gently bring me back to breath counting.

* Crow is not a gentle spirit totem per se but generally if I’m getting “schooled” it’s more like: Him: Don’t do that dumb thing. Me: WHAT? I CAN’T HEAR YOU BECAUSE I’M DOING THAT DUMB THING! . . .oh shit, things are not going well. Halp! Halp! I will stop doing that dumb thing! Him: I told you so.