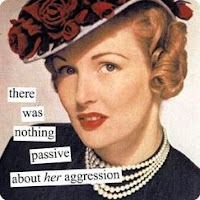 DISCLAIMER: If I follow your blog, if I’ve made nice comments to you, etc., etc. I obviously don’t mean you in this entry.

I’m having a shitful day today, so why not alienate some readers!

I sort of spent my twenties fighting against who I really was in oh so many ways. I didn’t want to be a kitchen witch. I thought that was the least impressive, most Holly Hobby branch of magic there is.

Jow and I were talking about why I fought this yesterday, he said it doesn’t make me lesser. But I said, it does. I’ve just grown not to care and to honor who I am. It makes me LESS formally educated, LESS full of hermetic/goetic/golden dawn occulty goodness, LESS theory based magic, LESS plugged in to having 24/7 chitchats with my gods, LESS inclined to have some kind of formal magic fancy dance, etc., etc.

Now, I’ve never felt in this fabulous blogosphere that any of *you* have ever made me feel this way, but you have to picture me from ten years ago: I’m constantly listening to NIN! I wear boots with sparkly laces to my corporate gig! I’m thrashing around on top of tables pumped full of piss and goldschlagger! I’m trying to break glass ceilings! I’m smoking cigars with the boys! I’m demanding my place at the occult table at occult events! I’m getting tats! I’m going through Shamanic trials! I’m fucking punk rock and . . . you want me to bake a cake? Really? Really? So I fought against it for while which is why I wasn’t terribly successful in my own personal magic for quite some time. Somewhere around 27? 28? I started really embracing it. Once I bought my own home, my own hearth, I *really* started embracing it. I had the tools all along, it turns out, I just needed to know how to use them.

When I first joined the blogosphere, I wanted to bff a variety of people in the magical world. But let me be honest, most of all I wanted to befriend fellow kitchen witches. Sisters/brothers unite! Let’s get some spit, blood, hair, dirt, and basil and get this party started!

But I didn’t find too many. The fabulous Mrs. B of course. A little later I demanded an introduction to my PEH, who while not a kitchen witch per se, at least does magic similarly, Lavannah who has land that I covet.

I googled. I tried tracking down people. I tried a lot of different key words. And honestly, I found a lot of people who claimed to be kitchen witches, but in scanning their blogs all I generally found were recipes and chatter about their kids. Now, there’s nothing wrong with any of that. But that doesn’t make it a magic based blog because you need, like, magic in your blog at least some of the time to qualify.

What Doesn’t Make You a Kitchen Witch Per Se

A recipe isn’t magical in and of itself. Just dumping a bunch of recipes on your blog doesn’t make you a kitchen witch anymore than it makes Wolfgang Puck a kitchen witch. If you said I use honey in my Chocolate Lavender Mousse to sweeten my mother-in-law towards me because she’s a complete bitch on wheels to me by that point in the meal or I put menstrual blood in my spaghetti sauce so my husband still thinks I’m dropping it like it’s hot even when I’m tired and in sweats, rock! Those are magical acts. Bring on the recipes!

Having children. While yes, it is a v. specific way to mark your transition into motherhood (sometimes), kids don’t really make you a practicing magic type person any more than it makes SuperNanny Mary Poppins. It’s okay to talk about other things in your magic based blog besides just a never ending compendium of your magical practice, but if you’re not talking magic at all then . . . it’s not really a magic blog then, is it? Things that would: Using magic to help soothe a baby/get a baby to sleep (I will only slightly guiltily confess to having done this before), protection magic, detailing tiny rituals you do with your kids.

Being a Homemaker. I do very much think that unpaid labor in the home needs to be appreciated and ideally compensated (please see here for more clearly articulated thoughts on the matter, it’s applicable for both mono/poly people), but it’s a job. And just like going to work in an office is not a magical act in and of itself, neither is taking care of your home. If you were talking about cleaning/organizing in a magical blog and discussing how to be more green (because we need to take care of Mother Earth of course and she’s a goddess in and of herself), discussing what oils you use to scent your house and why, what you do to keep the house spiritually/magically clean, rock on.

If the Personal is Political, then the Every Day is Magical. Look, you don’t have to cast +5 magic every time you make hotdogs for dinner on a Tuesday night. But what can you be doing in your every day life in your hearth to make it more magical? Smudging with sage every few days to clear out the energies? Spray bottling your bed with a water based mist you made that has come to me oil in it? Choosing your cooking herbs based on magical purposes? Go crazy.

Deb’s Example Rit for Making the Every Day Magical
I had been hemming and hawing about starting my current novel because (a) I’ve never finished writing one and (b) it’s a little silly in a genre that’s already a little silly. But it came to me in a dream and it feels right. So I started by not just slapdashing it together, I took my time. I did research on names, other books in the genre, brainstormed and I made a mood board for it. When I knew it was time to start writing, I wanted it started right. I wanted my surroundings perfect, like giving birth (which is what I do with writing). We’ve been getting pretty awesome about keeping the house tidy. We made sure everything was clean, went to brunch (appropriate for the kind of novel it is) and then I put on mood music and wrote, drink in hand. When I finished the beginning, I sealed it with eating a really posh chocolate (salted dark chocolate with balsamic and caramel) from the best chocolatier in NJ which was also appropriate for my novel’s genre. It wasn’t about me putting together a mojo bag in this case, it was about choosing my actions carefully and doing everything with intent. There would have been nothing wrong with making a mojo bag, but it was more important to write in a magically charged environment for me to get this show on the road.

Get a Base Education in the Lower Arts. Yeah, yeah, you like to put on your robes and call on all the archangels and whatever. Cool. But sometimes for whatever reason, you’ll need to know how to do things quick and dirty, so learn how. Learn what salt and kitchen herbs can do for you, learn about mojo hands and honey pots and spirit bottles. I recommend of course the incomparable M. yonwode’s Hoodoo Herb and Root Magic as your Idiot’s Guide. Test yourself if you’re super structured magically, pretend a friend needs a fertility charm tonight and you need to get to her just using stuff around your house. What do you do?

Get a Base Education in House Wifery. Some men back in the day got married because they had no clue how to take care of themselves. While that’s not so common in this day and age, you still need a base education in house wifery to be a successful hearth wo/man. Thanks to most of the first world being a conveience culture, you may have been getting by on relying on take out, a dry cleaner, and a cleaning service. That’s all well and good, but you’re missing pieces you need to be a successful hearth wo/man. If you are missing any of these things, that’s okay, don’t feel bad about it. But a lot of people cry, Oh I’m no good at it! Or, I don’t know how! Ignorantia juris non excusat. Ignorance of the law excuses no one, so get to work. It won’t be perfect from the gate, but nothing is. Ask someone better versed for help, if you know someone. Worst case you burn a few casseroles and shred a few shirts, it’s no big deal. Even if you won’t use it for a while or you think ever (though you’d be surprised), these are all good life skills to have that will translate over into your magical life. Think of them as Hearth Meditations.

Can you:
* Do your own laundry?
* Have your house clean enough to have your mother or mother-in-law or Miss Martha over without them making a face?
* Cook a dinner for yourself and others?
* Meal plan?
* Budget and financially plan?
* Be able to make a casserole quickly for an emergency?
* Host/ess a party?
* Know how to bake something from scratch?
* Know how to do your own grocery shopping that’s more than just “box food”?
* Know how to do basic clothing repair?
* Know what to bring as a hostess gift?
* Know how to conduct yourself socially at various social obligations?
* Know how to give yourself self care?
* Know v. basic first aid?
* Know how to care for small children for a day?

I will be expanding on some of this in future entries. If you have any specific questions, shoot!