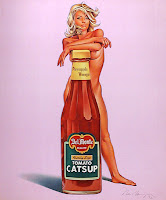 I have a bunch of posts in mind, but I would like to follow up on some previous posts.

1. Unrelatedly, I just beautified Jow’s blog. Go check out its glory. There was minimal orneriness on his end and when he disagreed with me, I just bit him to subdue him.

2. Secular Beltane – Mine was pretty pleasant. Wasband decided for reasons unknown to me to not show, tiny children managed to not maim each other in the traditional stick dancing, the maypole was performed, singing was done. I then passed out for a few hours when my mom called me to inform me my somewhat tiny cousin’s communion party was that day not the following. I suppose it was appropriate enough to be at a country club, drinking vodka tonics, dancing with a baby on my hip and dancing with my mom and stuffing my face with expensive food. There were still tiny children in white running around as well.

Conversation with my mom:

Mom: What’s Beltane? Someone asked me and I want to make sure I got it right.

Me (thinking: Oh . . .shit. Who’s asking her about Beltane? Moreover, how does she know anything about it? Don’t talk about gratuitous fucking and that it’s okay to have a bastard child as long as the math added up right!) : Um . . .okay. Well, it’s a holiday to celebrate winter being over and summer coming. There’s dancing, people try to wake the earth up with sticks and making noise, singing. There’s . . .a maypole which is more dancing but also . . .represents . . .fertility.

Mom (satisified): That’s what I thought you godless heathens were doing.

3. Aphrodite – not a cheap date. Getting stuff ready for her altar for my grove’s celebration of Beltane happening this weekend has not been what I would call inexpensive. In the further adventures of boundary settings with your gods, I did make it clear that when I ordered stuff for her (after checking with vendors about delivery dates) that if things were not received in time, there would be no “double buying”, altar items would then be obtained from items around the house. But I got a lovely wine glass hand painted with a pink daisy at the bottom and some other things. I also decided, inspired by Mrs. B to have a board up for glamour bombing post its for Operation Beautiful which I too have enjoyed! It seems both Beltane and Aphrodite appropriate.

4. Trevia – Jow had gotten fixed on starting candle making soon. We’re going to do a test run for Beltane, and thanks again to Mrs. B’s great idea on herbal oil making, I’m looking forward to dressing our candles. It will also come in handy for mojo hand making too I think. Also, because I’m a planner, otherwise known as oh shit! Beltane is in T-5 days and getting to a witch store is nowhere in sight, I’m going to try my hand at making cone incense for my Aphrodite altar.

5. Hexing – I had thought my more moderate spell would suffice, but I had come to find that the issue I have on my mind was really, really starting to eat away at me. I carefully considered my “case” and decided to bring it to what I have started calling The Court of the Ladies which was held in our dining room (Jow scampered through there faster than a cat for several hours). When I called in one of the Ladies, a random storm rolled in which Jow told me was an indication typically of said Lady that she is present. I will likely post more about all this at a later date.

6. Perfect Day – I talked to my boss who nervously mentioned that if business did not improve, cutting summer hours would be necessary that I could likely collect partial unemployment on top of my reduced hours which seemed to be a relief to her. It’s going to depend on a meeting she has next week. I find myself surprisingly open to either possibility. If my hours get cut, I just (as in today) got some more potential freelance writing, I could shop more at the farmer’s market, make my own household products, reduce my consolidated credit card bill (most likely), cut cable potentially, even the intertubes potentially if need be, work on my kitchen witch book, work on more novels and short stories, craft more, etc., etc. I’m letting this roll and feel pretty zen about it which then in turn freaks me out and restores my natural internal order. So Gordon, feel free to take all the credit or the blame for this when it all comes down. 😉

7. Life hacking – Jow and I had an impromptu meeting at Starbucks (how professional!) about life hacking. We are testing out Leechblock which is pretty cool, you can set it however you like to keep you from massively wasting time on the intertubes. We are attempting to not watch telly before 8p. He helped me brainstorm for my steampunk story and we had a general state of the state meeting on what we would like to accomplish (for me, see Perfect Day). We figured out house cleaning (our levels of cleanliness actually match up pretty good and we share labor pretty well, but things weren’t getting done the way we’d like. So we decided he would do the things that are hard for me to do with the fibro – dishes, cat litter, garbage, vacuum, and laundry and I would take 15-30 minutes every day to do general household cleaning). I also decided I’d like to be more active, and got out my yoga deck and came up with a routine and then promptly got sick with some kind of allergy/head cold/stinky cat syndrome thing that Jow got too, but it’s a work in progress.