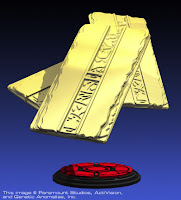 Jow thinks I’m secretly a Ferengi. Dark secret, I’m closet geek. The Star Trek thing, I have my mother to blame. Jow likes to sometimes try to coax out how deep I am into the dork forest by making seemingly innocuous statements about various parts of the various series which *always* forces my hand in my frothing retorts to show what a complete geek I am.

Now, okay, granted it took a while for women’s right to really kick in there, but it happened. The Ferengi never got involved in slavery or other imperialistic bullshit which does suit my Damn the Man sensibilities but they were always there to make a profit regardless of whatever crap everyone else was fighting about, which I also appreciate. The Ferengi are totes the corner coffeehouse to the Alliance’s Starbucks (and that’s all you’re getting!).

I’m an industrious little squirrel. I always have been. I like busting my ass towards a goal, I like getting shit done, and I like making money.

Now, bear with me. Flashback! I was Catholic, dutifully praying constantly for whatever it was I wanted in the moment, a pony, the love of Scott Reiner. I rosary’ed like a champ, I went to confession on the regular without playing the how long can I make the priest take to listen to me before he’s forced to take out the Bible game my sister favored, I went to church, I did what I was supposed to do like a good worker bee. I liked the ritual, the structure of how prayer worked in Catholicism, but I disliked that the output was so capricious, at least in my experience. Constant prayer + the desperate desire for the love of S.R. = canoli afterwards? That can’t be right!

So blahblahblah why can’t I be a female deacon/personal general liberal agenda/general unsuccessfulness of personal prayer/need to irritate my mother, and here I am Pagan.

Except. . . I totes need structure personally. I wasn’t too successful in coming up with my own structure, and man, the idea of doing a full ADF ritual or Wiccan circle just to get some prayer done is enough to make me want to give up all my shoes.

Which eventually brought me to the Hindu pantheon in a pagan context. The way I was taught it was as follows:

1. There are mantra you need to be given by teachers, but the basic “seed” mantra is for everyone. I know not everyone agrees with this, but my general feeling is the seed mantra is like calling your deity on the phone, there’s only so much you can screw up unless you’re actively trying to. Learn the pronunciation of the seed mala, learn the general protocol associated with the deity, and hey don’t “call” a deity who is either easily offended or likely to be offended by you particularly if you don’t entirely know what you’re doing. I don’t “call” Lakshmi because she would take one look at my house and look at me and say, “Ugh. Seriously?”

2. How to do puja. I dig puja, it’s an (often) mini ritual that can be as simple or as elaborate as you would like and it involves a bell.

3. The stories, of Shiva’s family especially. They just really resonate with me, they seemed a lot more like something I could relate to. Joseph and Mary according to Catholicism just had baby Jesus . . .immaculately and . . .fin. There’s nothing wrong with that, and celibacy is sacred too but it’s not my path. Shiva and Parvati’s story of a blended family, fighting and making love is a lot closer to what I can relate to.

4. How to mala. This is where things *really* started to click for me. Mala was explained to me as a banking account, which appealed to my inner Ferengi and the rosary and mala are very similar which made the transition easy for me.

So, mala as a bank account made a lot of sense to me. Every time you complete a mala, you get to put a few pennies into your bank account. If you do enough malas, every boy, every boy in the whole world can be yours! Okay, that would take a lot of time, effort, energy, and austerities. But! Parvati totally got her man that way. Shiva didn’t want to pay her no mind and she was all, that’s cool. I WILL JUST MAKE YOU LOVE ME WITH THE STRENGTH OF MY DEVOTIONS TO YOU. And I appreciate that level of drive and motivation.

After reading Eat, Love, Pray, I realized my life was missing a nightly devotion. I had hesitated about any kind of nightly practice doing anything because I generally don’t remember to even water house plants, but it felt like it was time. Except . . .I was in the hole to Durga for quite a few malas I never said to her that I said I would say for bringing B. back home safe from Iraq. So like a proper Ferengi, I decided to do the math to figure out *how* many I owed her and when I would be finished being indebted to her. While indebted, I would endevour not to ask Her for anything, past being grateful that she held up her side of the bargan even if I was lazy/sketchy at best at following up in a timely fashion with my side.

So after Christmas, but before New Years, I started my practice with a rotation between Durga, Shiva, and eventually Parvati when I finally found her seed ohm, heavy on the Durga side. Right before Beltane, I finished my debt to her and it felt really good. Even though I’ve said a total of around 140 malas, I haven’t yet asked for very much, at least not for myself. Shiva is known especially for granting requests as long as the work has been done, which is handy. But it feels a lot more cause and effect than saying rosaries did for me. And should I ever decide that I *really* want that pony (which Jow would probably prefer to live with instead of SR who moved away when I was thirteen, so who knows what he became. Meth lab head? Stock broker? Househusband? Doctor?), I feel like I could get one which appeals to my squirrel Ferengi brain.

So far, I’ve gotten help with a tooth ache, a blister, a v. nice Beltane, got my friend G. knocked up (by her request! She and her husband were trying for their second), and so far M.’s husband E. has been doing okay with chemo. It’s powerful stuff!